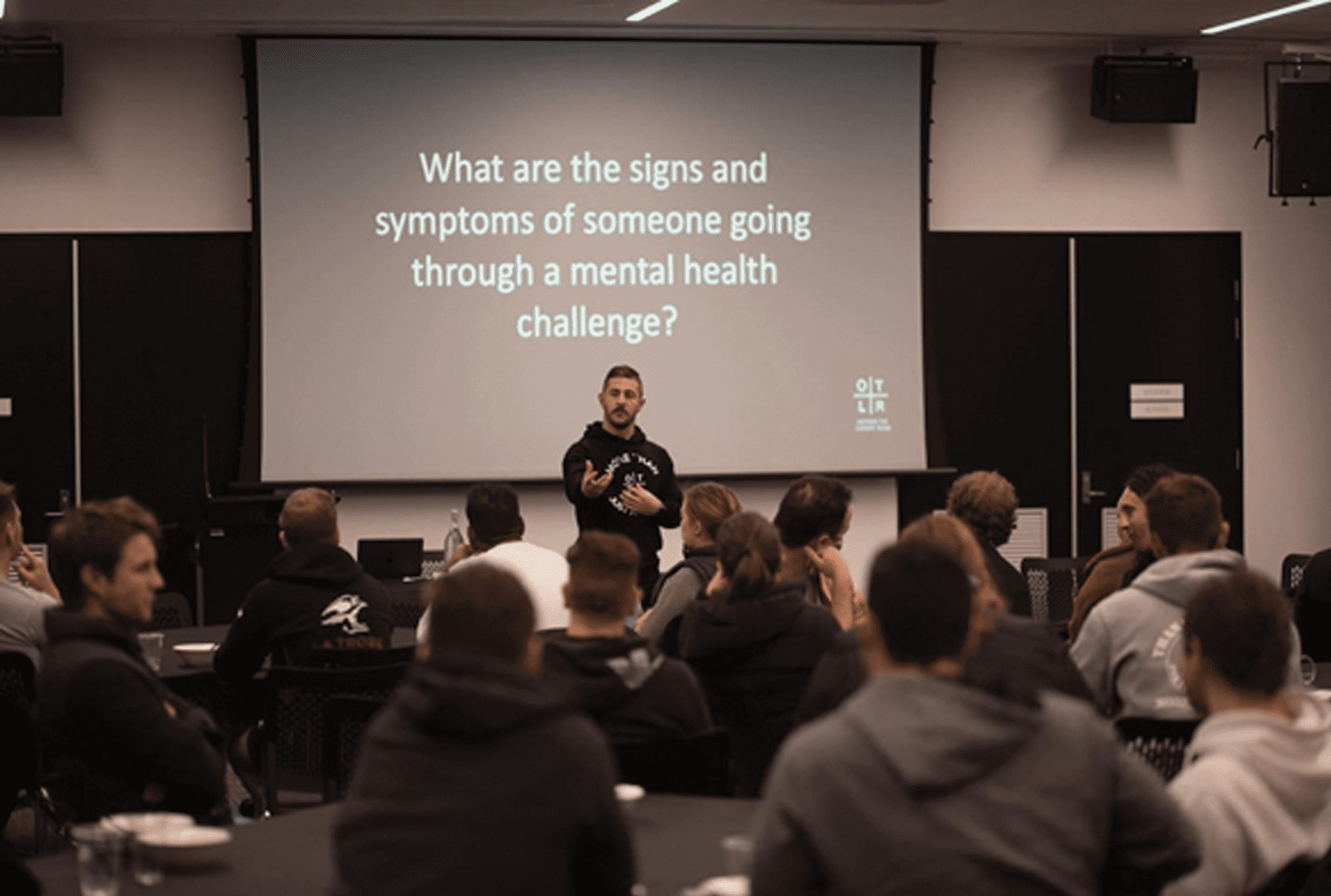 There are many responses to the question of why OTLR?

Why choose this organisation to conduct education sessions in your sporting club, school or workplace?

Why is this organisation making changes in hundreds of communities around the country?

Why is OTLR partnered with some of the leading organisations in the mental health space, providing prevention, ongoing support and postvention support for a tragic event or suicide?

Responding to why OTLR is a multilayer response because OTLR is multilayered, created with a vision to connect communities through conversation, with passionate facilitators and welfare professionals conducting sessions late at night, usually rainy nights after a sporting clubs training.

OTLR facilitators come from lived experience backgrounds, sharing their journeys and their stories to thousands of people, with the hope that at least 1 person in the room stops, thinks, and reaches out for support or takes that step to ask someone close to them if they are alright, do they need to chat and have someone listen.

It is multilayered because of OTLRs vision to work with as many like-minded organisations as possible, creating a strong team to support everyone they encounter, whether they be through counselling, postvention support or education around mental health, drugs and alcohol, leadership and culture, inclusion and respect, mental wellbeing, cyberbullying, gambling, or youth mental health. Working with established professionals to ensure that the education and the support is of the highest quality.

Responding to why OTLR would bring differing responses from individual facilitators, welfare staff or the communities who have experienced a session or received support. Why OTLR for me, well it brings more than just education, more than welfare support, it brings a connection, a passion, a drive.

Todd Morgan, CEO of Outside the Locker Room, well that means telling you about a café, a not-so-subtle nudge and a journey that could be life changing.

This organisation, this program, these people, they make a difference in lives that they will never know. Facilitators and welfare champions across the country, speaking in front of groups of people from ages 13 and up, who may never know if what they said has sunk in or made an impact.

For me, I know it has, even to just 1 person, because I know if there was OTLR around as I grew up, there may have been different outcomes, different experiences.

That café, that morning, with a late mate’s mum, discussing the impact OTLR could have on sporting communities around the country, we both knew that if this was around when I was growing up, things could have been different. Instead of the white coat, the support would be coming from someone familiar, someone similar, someone who had lived it before. We both knew that providing this program in sporting clubs meant that you could reach those who wouldn’t usually reach out, those who tough it out with a 6 pack of beer and those who, in the sessions, sit down the back as if ‘this doesn’t relate to me’ until they realise halfway through that it truly does.

That café changed my life, it showed me that keeping your mates close, using sport as the connector, can truly change a life. It isn’t about the winning or losing, it abouts that conversation while watching the game before or the game after, it’s the chats during the warmup and in the stretches, it’s about Thursday night dinners.

Stepping into the hundreds of sporting clubs of differing sporting codes in different parts of Australia, metro, rural, regional, I can tell you that the nicknames may change but the conversations are usually the same. The smell of a change room is the same, the smiles and laughter are the same, the Thursday night dinners are cooked by the same stereotypical people, veterans of the club who live and breathe every moment.

I can tell you that the kids playing, imitating whatever sporting code we are at, running around, loud, laughing, connecting, is the same.

The clowns, the serious athletes, the ring ins, the vets, they are all there, in every sport, in every club.

It may all be familiar, but each person has their reason for being there. It may be to win a premiership, it may be to keep fit or to just keep playing sport with their mates.

Or it may be, as one club, to have support, to have a purpose, to play in the Over 650s on the weekend or even the Over 60’s (one guy who was playing football was 72).

Their stories are all different, but there are similarities. This club provides structure after a breakup, a divorce, a death in the family, or an outlet for a single parent and their kids.

This club is their family.

What better place to bring people together, to raise awareness on mental health, something 1 in 5 Australians will be faced with in a year. To raise awareness for inclusion, substance abuse, create a lasting culture or provide insight into leadership traits. What better place to encourage mates to call each other on the way home just to chat, to check in, to provide the proper way to start the conversation to ask a mate if they are ok. To provide the insight into the supports that are available, to show a community that it is ok to need help, to put a hand up, to reach out.

I know that it has saved me, both as a player, a supporter and OTLR facilitator. Those nights on the other side of the country, away from home, preparing to walk into a room of 100 strangers, to tell my story, to be vulnerable, nerves always kick in.

I don’t know these people.

Then I start, I see in people’s eyes that this education is needed, this support is wanted and that we have just brought this community closer together by providing a space for their members to be vulnerable, to open up, to support each other.

Then I remember that I am one of 140 people who are out there, representing OTLR to so many communities who are experiencing the same thing we are experiencing right now, in this room, on this cold rainy night.

I remember that there are layers to the support this community is receiving, that when I come back to run the second session, I will be greeted with a conversation and a smile.

For me, OTLR is my family to yours.

OTLR is the support I wish was around growing up, knowing that it could have saved lives, could have changed lives.

It is the fabric in which connection can grow in some many lives.

My wish for you is that you can experience OTLR in your community because I know it will change your life, as it has done mine, and I know that it may just save a life you didn’t know needed saving.

Outside the Locker Room

Subscribe to our newsletter and never miss the latest updates from OTLR.